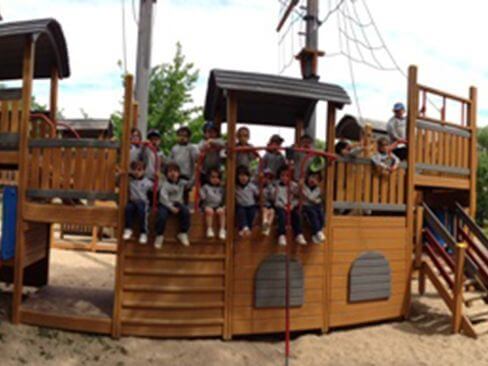 Today the 3 year olds had a BLAST!!!! As you know we are learning a lot of things about the wonderful world of the Pirates.
So this morning we went to a park, but to a very special one, where we found nothing less than a PIRATE SHIP!!!!!!

I3A went on a treasure chest hunt! As you may have noticed our friend Peter Hero was lost, and yesterday we received a mysterious map and a letter from the Mad Pirate who asked us to get Peter Hero using the map and the clues. And so we did!!! And the best part of it was that we found HIM!!!!
The enthusiastic I3B group of children could as well have fun at the park. Not only were the little people pirates but also their teachers! All of us wore a bandanna, built a boat out of newspaper and had “friendly” sword fights. On top of that, we had the opportunity to get on board the biggest ship we have probably seen!!! And besides , we had a beautiful picnic to share the snacks with our classmates. It was a really memorable time we will never forget!!
The I3C kids were real Pirates for one day! Some of us were “Bad Pirates”, “Princesses Pirates” and “Good Pirates”. When we got to the park we explored the area and we discovered a huge Pirate Boat!! We hopped aboad and played inside for a while and after that, we got ourselves ready to live a new adventure.
Therefore we painted on our faces an eye patch, a beard, some colourful cheeks…When we looked like real pirates, we were able to sail the boat, arrrggg!!!!
Suddenly, we heard a scary noise and we had to jump into «the sea”. Once there, we made different groups (girls-boys, colour groups) and we dived under the sea struggling against the sharks, the crocodiles, the octopuses and so on.