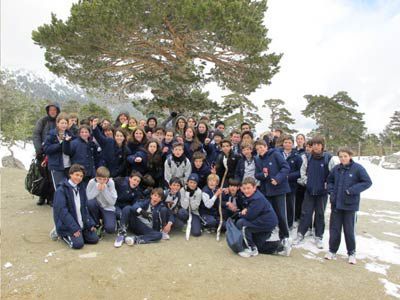 On the 27th of March the Secondary students spent the day in the Guadarrama National Park, near Las Dehesas de Cercedilla. They had no idea what was waiting for them on this trip, they were going into the wild! We were surrounded by magnificent scenery as we set off to face one of the biggest challenges they had ever had. We were going to walk from Las Dehesas to El Puerto de la Fuenfria, a 3 hour mountain hike.

At first everyone was happy to spend a day away from school until we began to slip and slide over the slippery snow covered surface of La Calzada. Pretty soon an internal battle commenced with the students believing that they couldn’t walk any further because they were so tired. To reach the summit they had to make a much bigger effort than they were used to. Despite being accustomed to a comfortable life our aim was that they knew their limits, we wanted to show them they were capable of this and much more.

In the end everyone reached the summit, the students learnt they were capable of more than they thought they could. They faced adversity and triumphed, we are very proud of them and the effort they made. Hopefully they will now realise what they are capable of and be more demanding of themselves. Everyone’s self esteem was increased and hopefully this will serve them well throughout the rest of the year.

Everyone, teachers and students had a great time, we walked, we had a snowball fight and we tested ourselves. We learnt some really important lessons; happiness is only real when it is shared, adversity is easier to face when you have the support of your friends and we all realized that effort and self-improvement are within us all and are key elements to making us better people, better teachers and better students.